Happy New Year friends – so pleased to be back here at last and with a new year in tow. 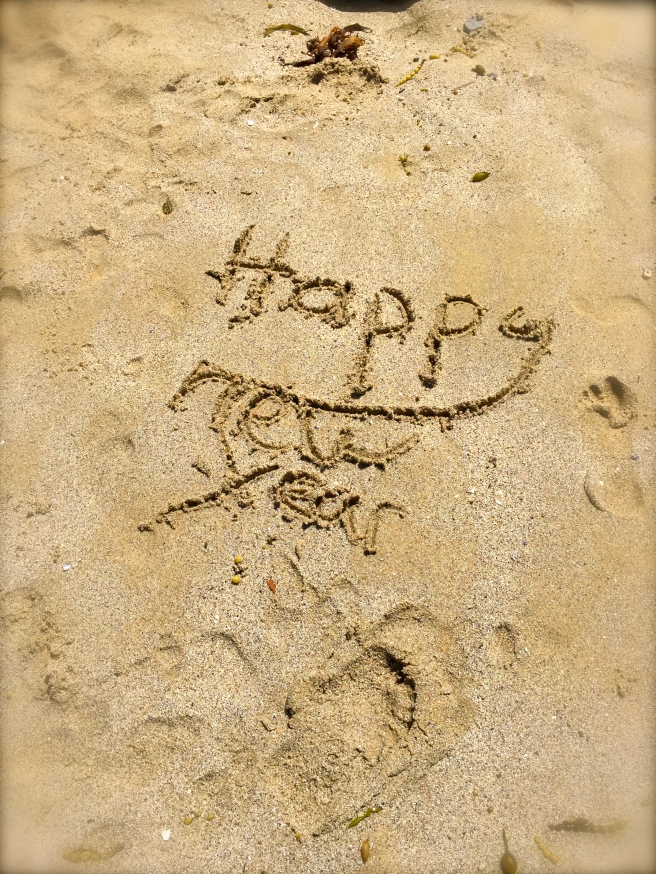 Here it’s a beautiful sunny day that’s a welcome relief after four days of solid heavy rain. The rain’s had us hibernating which it almost goes without saying has been no problem for me – there been plentiful coffee and a whole lot of good home cooked food after living on whatever was  easy to cook on the camp stove for the previous week. There’s been a good book, Season Five of Downton Abbey and another totally addictive series I had no idea I owned keeping me not too far from the lounge. The only thing to interrupt my cave dwelling has been the odd mad dash out into the rain to corral wayward Guinea Pigs and to feed dog’s and chickens that were almost washed away and theres been a weeks worth of washing to get through with everything sandy and smelling of the sea.

But today – – –  the air is fresh and the breeze is  crisp and  I feel like I might just be ready to make a start on this New Year. See the new year has a way of sneaking on up and giving me an awful fright, asking me questions I’m not ready to answer and right in the middle of my holidays too.  So as always I’ve been taking my time getting started and warming up to the new year slowly. No doubt we’ll  talk plans and goals at some stage soon  but in the mean time, not so much as a distraction but as a way of getting me there,  let’s you and I have a bit of a catch up. 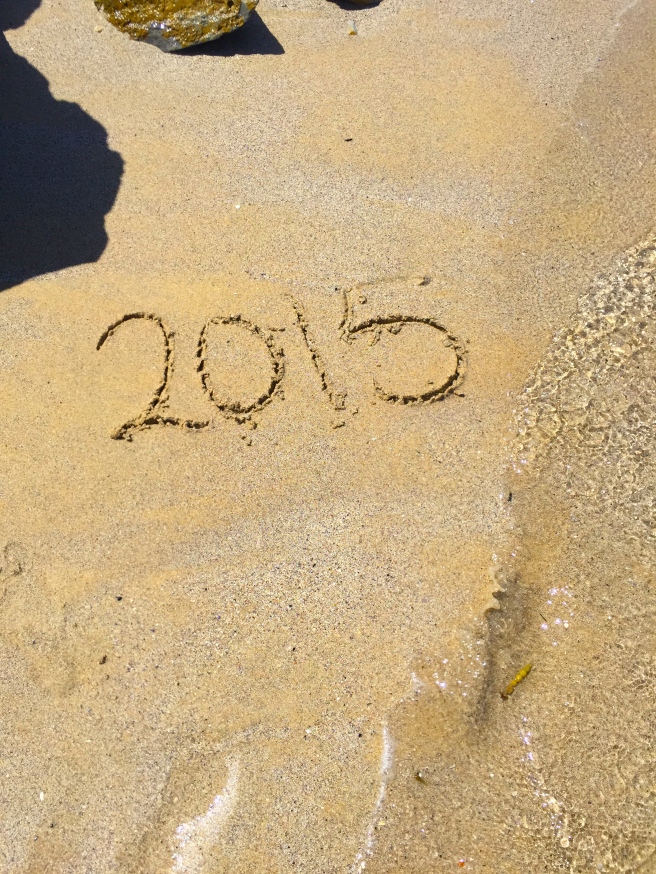 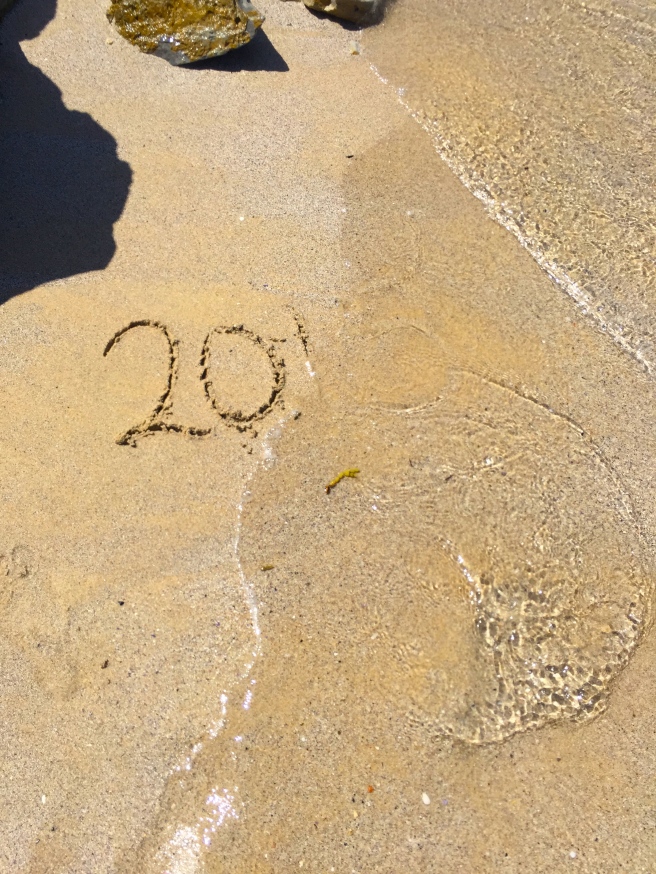 I would have liked to have been here a whole lot sooner so I could at the very least send my Christmas wishes your way but my internet service AND my computer decided they weren’t doing Christmas this year and threw one spanner after another in the blogging works.  And just when we got it sorted and I thought I might make it in by a whisker on Christmas Eve my computer mouse turned up its toes and died. So my lovely Christmassy posts remained un posted and are well and truly lasts years news  – – –  I was with you in spirit though. 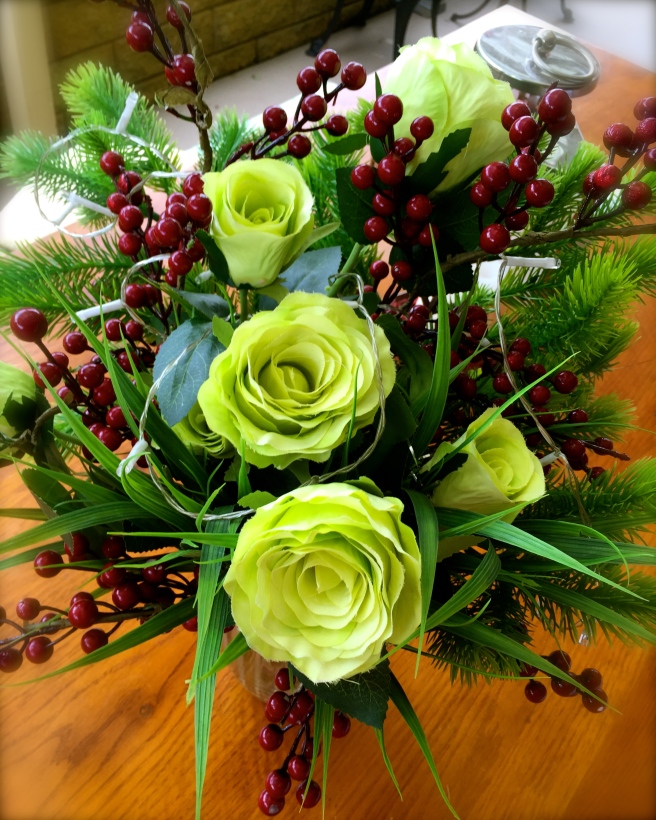 The issues with the computer were quite fitting given that I’d decided to be totally relaxed about what did and didn’t get done this Christmas and trust me there was a whole lot that didn’t get done. I love a little bit of Christmas decorating but this year  “little” ended up the key word. We managed to get our tree up  – twice in fact – so we weren’t a total loss. The first time  Ken had a slight mishap negotiating his way through the Christmas boxes and knocked her over. Gasps of horror at first but nothing broken including Ken so laughs all round because it’s such a typically “daddy” thing to do. We strung a few lights, set up our nativity scenes, hung my favourite wreaths and that’s as far as we got. That took us a week  – seems the go slow set in early. 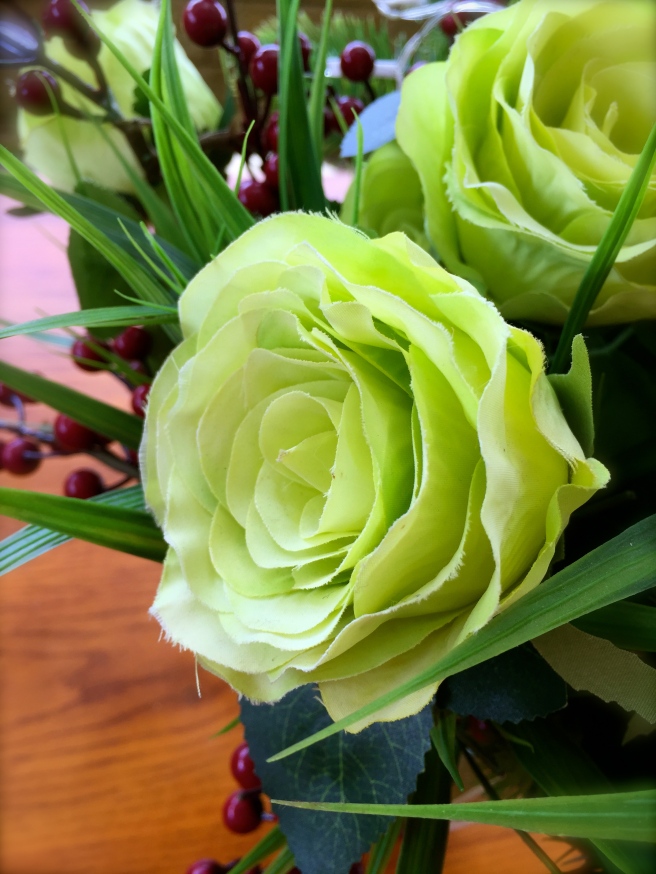 I had two other boxes of decorations beckoning but the more I walked past them the more I thought “ain’t gonna happen” so they returned to the garage without a fuss. So we had a busy month but without the extra pressure I often put on myself to create and bake and hang and tizz,  except what I wanted to do.  Olivia and I made red and a green jellies  but I don’t think that counts as baking and I finished off a wreath I’d started making last year. 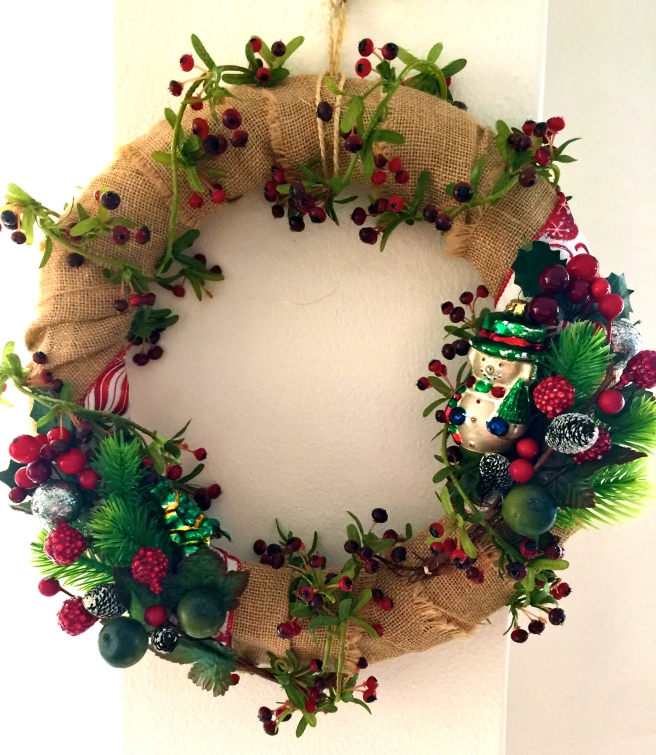 The house still  felt Christmassy, there were no complaints from the kids. Apparently there’s no one that comes around and checks  that your doing Christmas right or with the appropriate intensity and when I think about it I don’t think we were any the worse off for it. In fact I know I was actually a whole lot better off for not killing myself to do everything and be everywhere. It’s the Christmas decorating you do when the school year is finally over and your completely exhausted and when it’s just too hot so you go to the pool. It’s the Christmas decorating you do when your your little girl turns nine one week before Christmas and she’s invited six friends over for a party and sleep over!! Lets suffice to say they all had a blast and we lived to tell the tale. 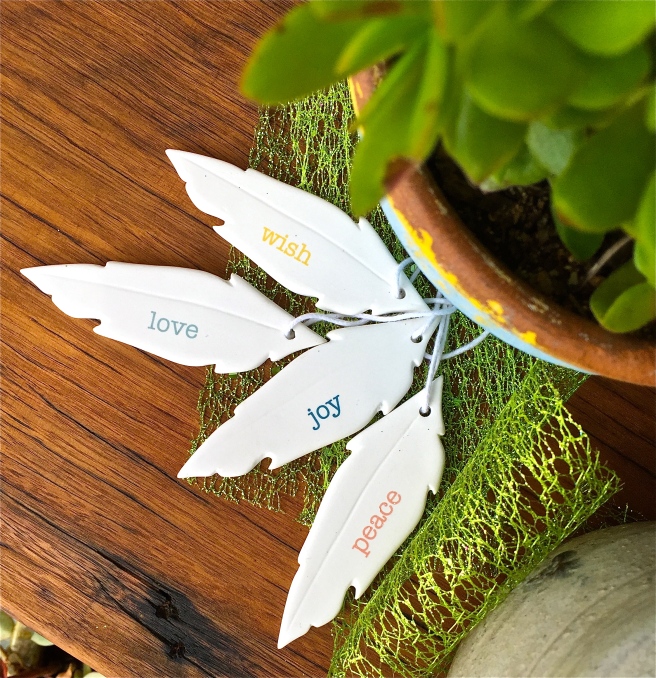 Less fuss didn’t save us from our usual round of not quite Hallmark movie moments though. The tree setting up in our house is never the joyous family time that we’ve somehow been duped into thinking it will be.  Somehow the excitement of Christmas get’s to Ethan and despite him counting down the days till we can set up the tree, the minute those boxes come up from the garage his mood nosedives and he is cranky and snappy and sulky and nothing says happy Christmas quite like that does it. I did manage to cut them  off at the pass as they were warming up for what’s turned out to be an annual knock down drag out fight over who puts certain decorations up and who puts the star atop the tree. Ethan thinks as the oldest it’s his birthright. Olivia disagrees. I called time drew names out of a hat and ended the whole “discussion”. 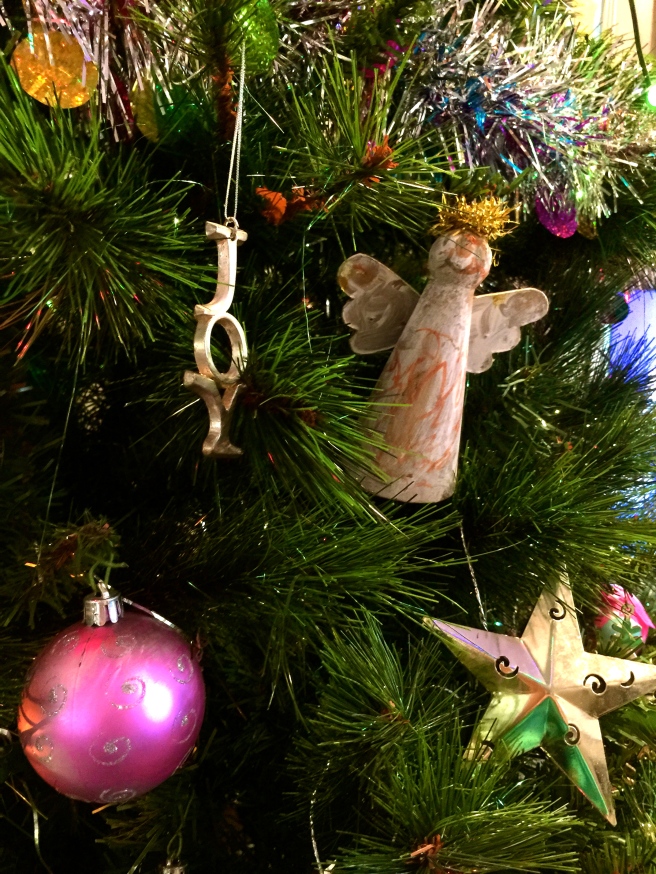 Christmas Day we only had one stomping off into the bedroom in a huff and slamming the door incident (not me I’m pleased to say) which is not too bad for a  Christmas day I think. And then of course there were those moments that shone –  the chinking of vintage champagne glasses together with the kids to say Happy Birthday Jesus, Olivia dancing for the whole family on Christmas Eve to Aussie Jingle Bells and her sheer happiness at all the yummy things I’d laid out for lunch and being able to choose whatever she wanted – apparently the perfect lunch is having main and dessert on the same plate – I tend to agree.

Truly less fuss  doesn’t make for a perfect Christmas any more than going all out does. I think we all know by now there’s no such thing. The only perfect element of our Christmassing is Christ. Christ who is with us thank God in our Christmas craziness and on our most ordinary weekday, our constant companion regardless of the number on the calendar and despite the state of the house. And with all our fuss or lack of fuss as the case may be  in a few weeks time it will be a matter of:

“We were together.  I forget the rest. “ Walt Whitman

“When we recall Christmas past, we usually find that the simplest things – not the great occasions – give off the greatest glow of happiness.” Bob Hope 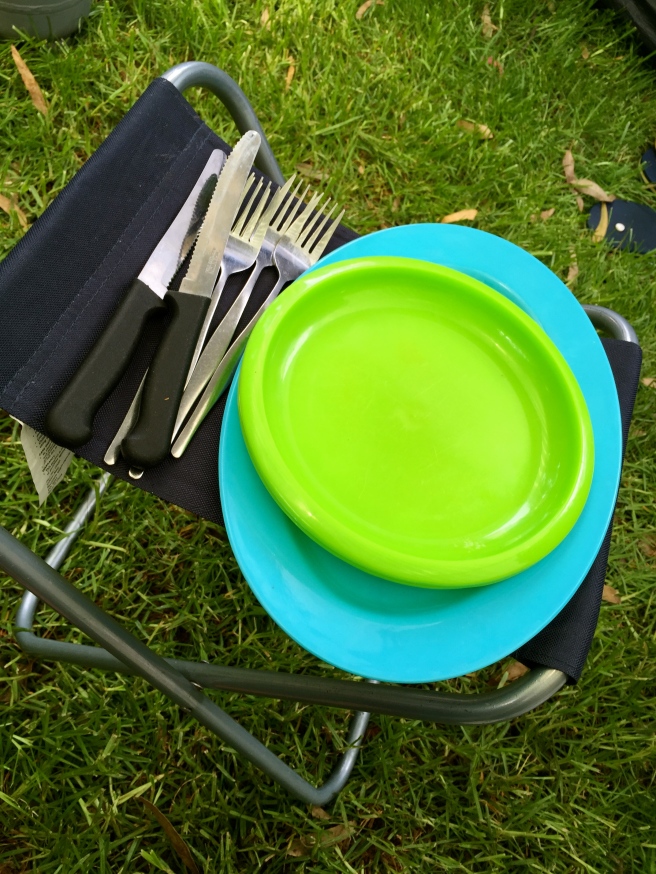 So two days post Christmas we left for a week of  camping on the gorgeous South coast. You can read about the type of fancy sshmancy  camping holidays we tend to take in this post  if you like. This year we booked early and we’re back in our favourite park right on the ocean. Ethan was still whinging that he’d really  prefer to be  holidaying on the French Riviera or similar (like we had planned that all along but by some twist of fate ended up camping). He  stopped complaining only when he was snorkelling, eating or sleeping. I tried to keep him busy with all three. We had a collapsing camp chair which ended in Ken doing a surprisingly effortless full backward roll, air beds that slowly slid down hill during the night, amenities which always seemed to be closed for cleaning when we needed them the most and pouring rain while we packed up. Happy days. 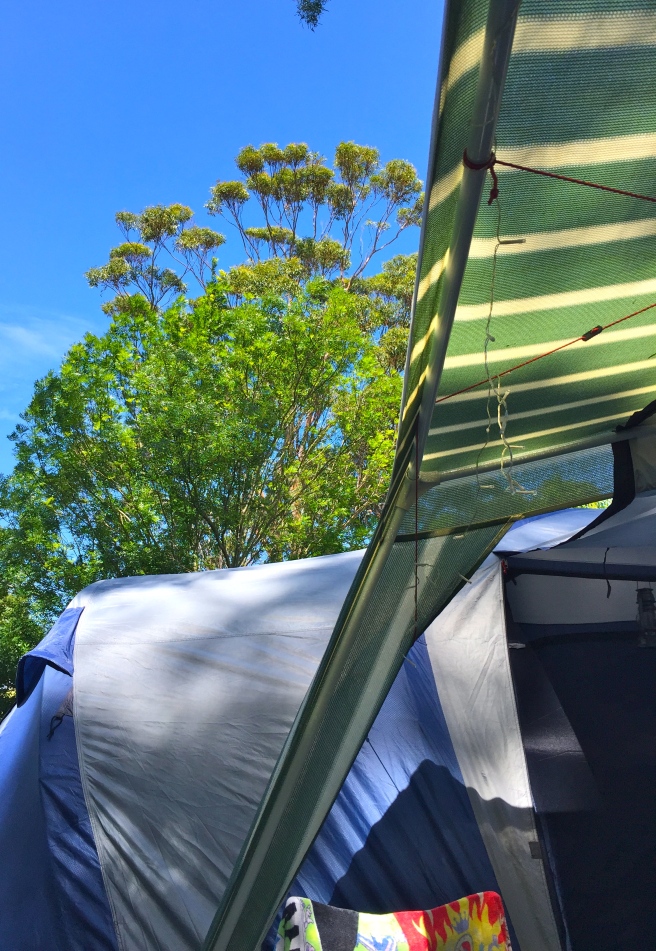 You might wonder why we do it –  I know I do at times, but in amongst the roughing it and the inconvenience is the time we have together that we don’t always get at home. With Ken working away so much over the last few years,  having time,  just us together is still a really big deal for us. The hanging out, not doing anything particularly spectacular except play snakes and ladders, eat camp fire food at odd times, and swim in the ocean with no TV to distract us and no rooms to hide ourselves in is so worth it.  Close quarters for a week has its drama’s but it has it’s payoff too and it’s the shared fun and crazy moments and the sense of “we’re all in this together”  that keeps us going back for more. 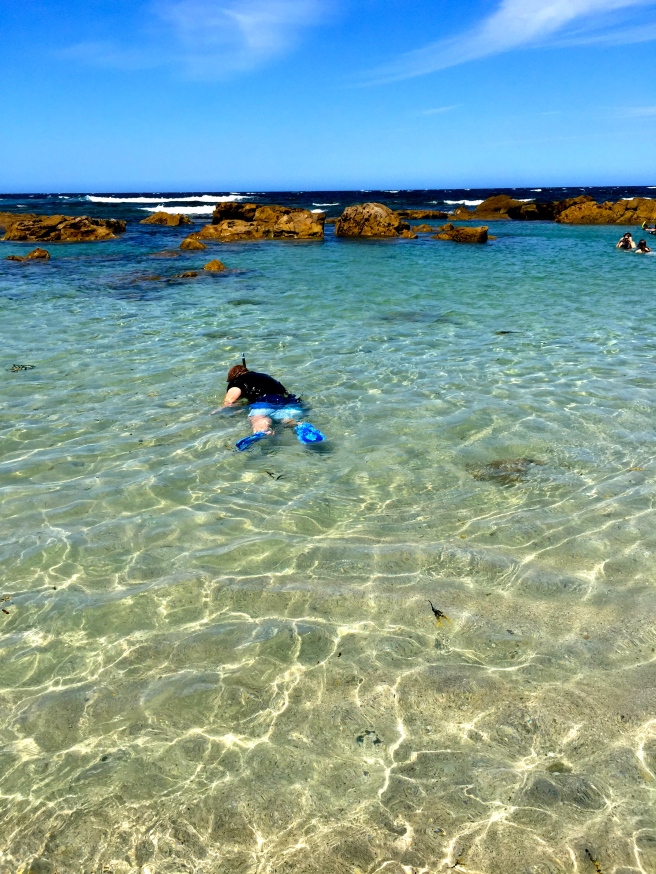 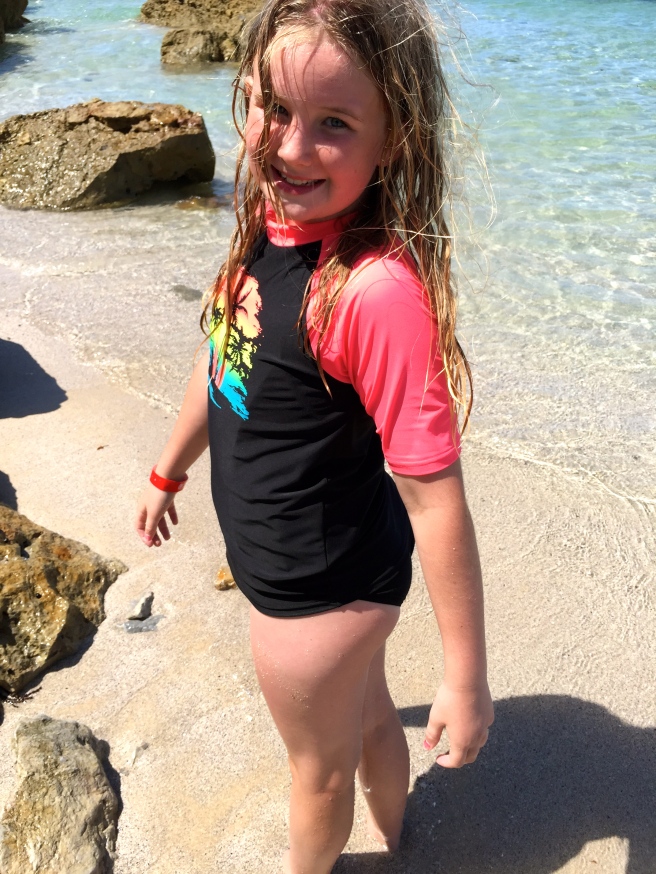 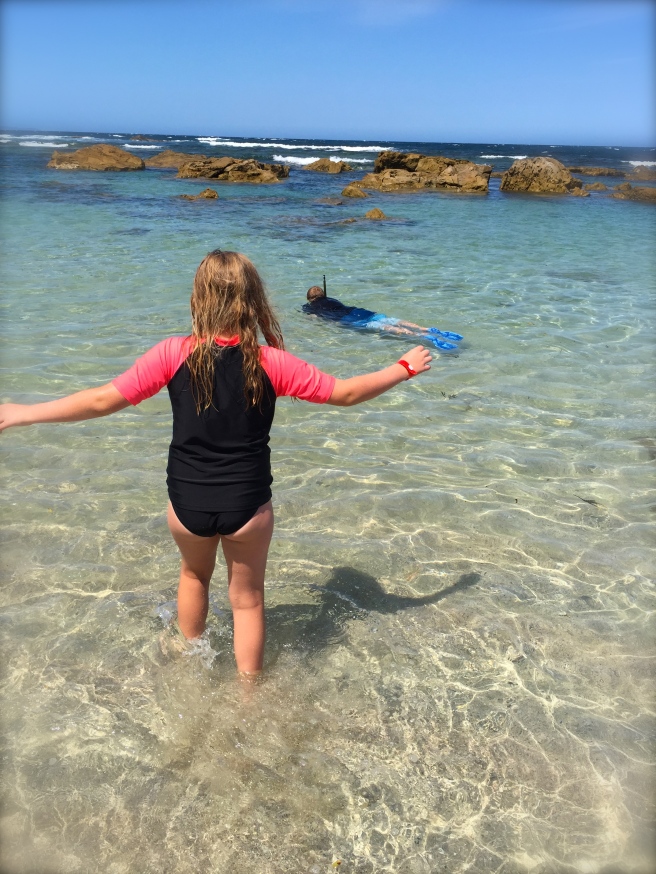 And me I am always grateful to have that vast and relentless ocean to stare at as the new year arrives.  It has a way of reminding me in my new year angst, of the magnificence of God’s love that flows vast and relentless toward me. In it’s enormity I feel minuscule  but I also feel seen, a part of it all with a part to play and for me that’s a reassuring place to start a New Year. 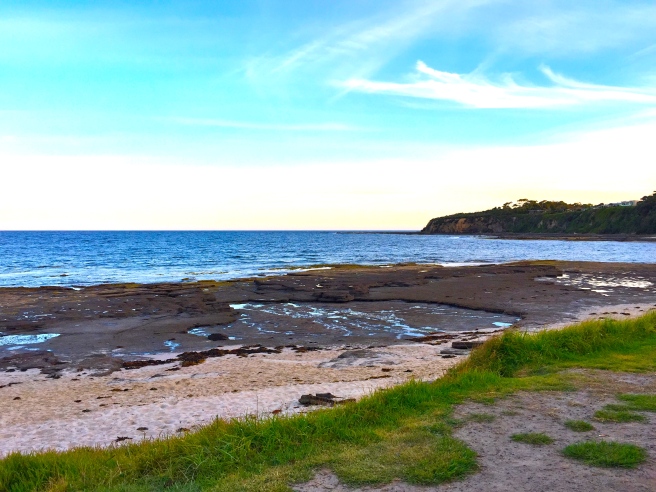 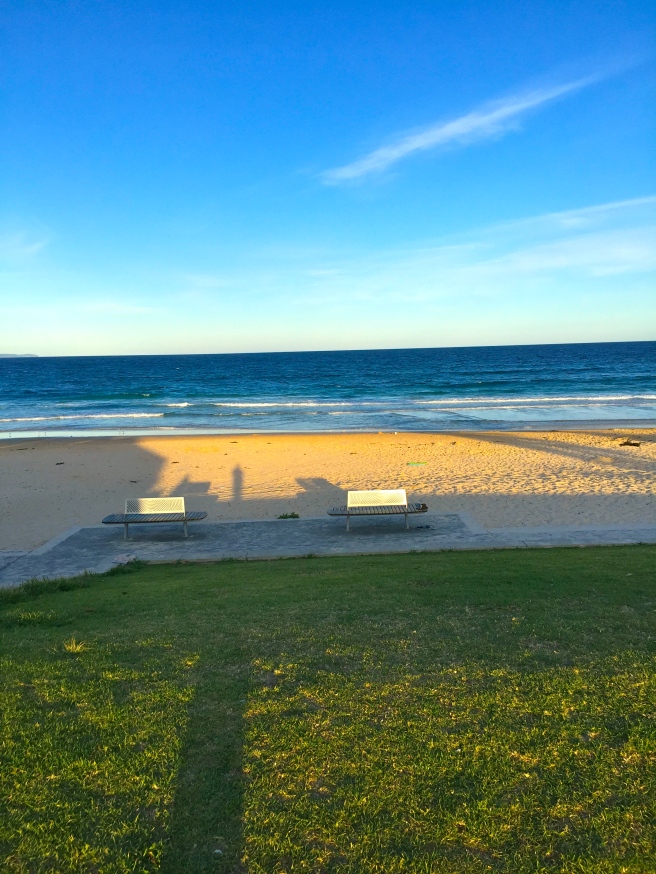 Camping is down sized uncluttered living in the extreme and it always reminds me how truly little we need to get along just fine. By the time we arrive home I’m itching to clear down the counters and empty out corners and give a whole lot of things I don’t need away. I take it a bit slower with the Christmas things as the kids get a bit forlorn when they see Christmas being packed up, so I just do a little bit everyday and they don’t notice so much and there are a few lights I happily leave up for a while because they look good anytime of the year – – – every thing else though is up for grabs. The New Year is all about fresh starts and clean slates and my house is always the first place I want to start when I emerge from my holiday lull. There’s something very therapeutic about a clean uncluttered kitchen counter, a  tinsel free floor and a fridge cleared out of all those left overs and theres something very motivating about seeing the sun after so much rain. Possibilities are mounting – – – – so maybe it’s time for the new year and I to have that chat.

I’ll let you know how I get on.

If your wanting to jump right into the decluttering here’s a post I read recently  – I normally don’t read posts with these kinds of titles but glancing around my house at the time I figured there could definitely  be a couple of mistakes I was making.  I found this one helpful. The Biggest Decluttering Mistake You Dont Know Your Making.

So what’s  been happening in your new year? Would love to hear

Love from my home to yours xx 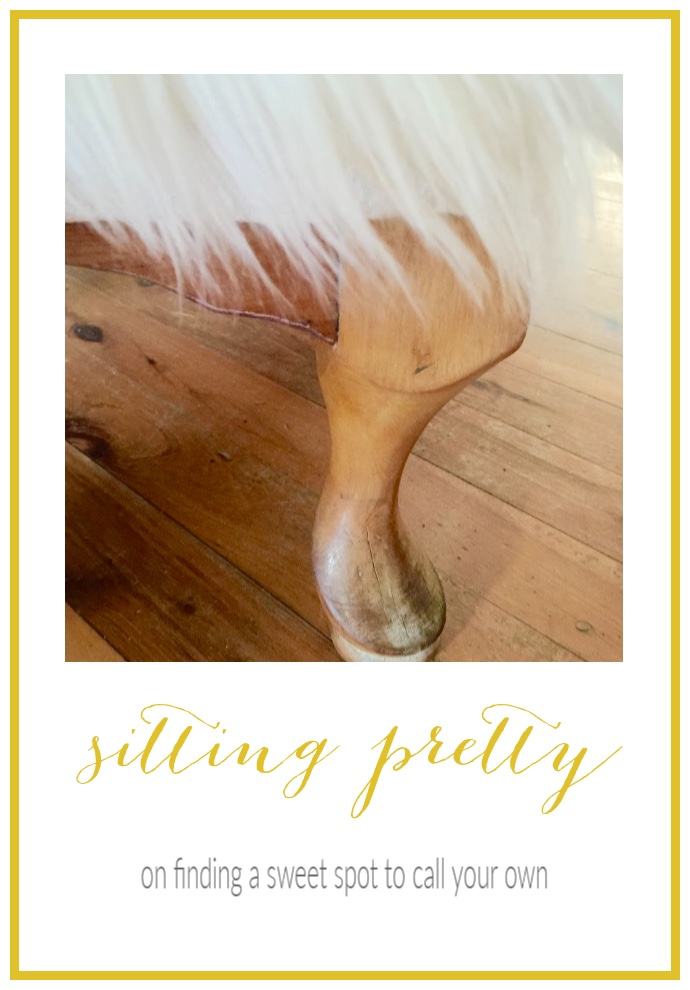 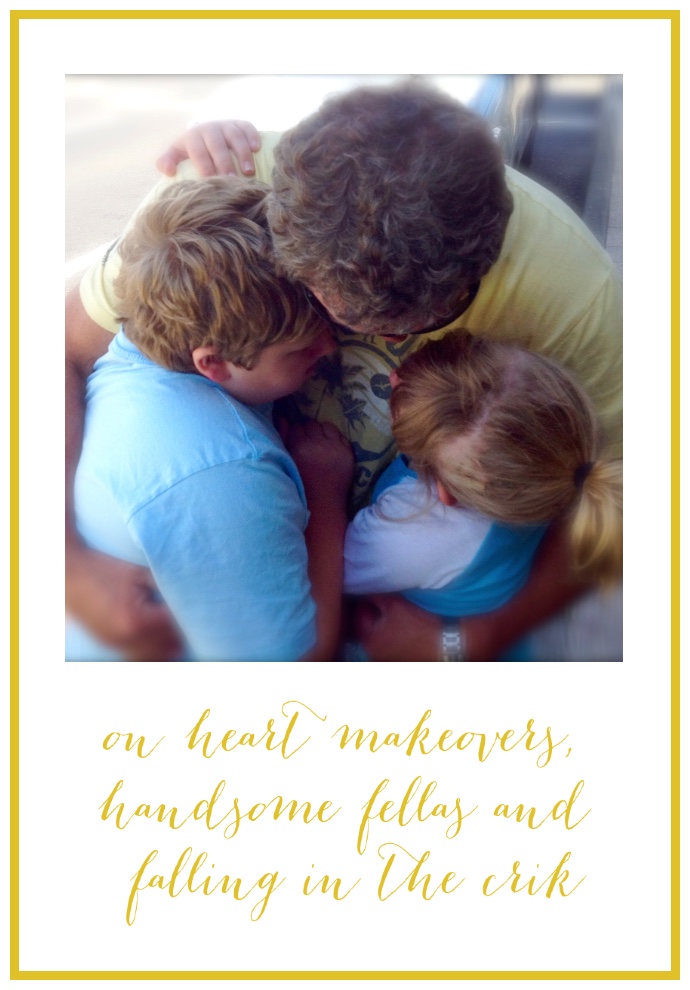 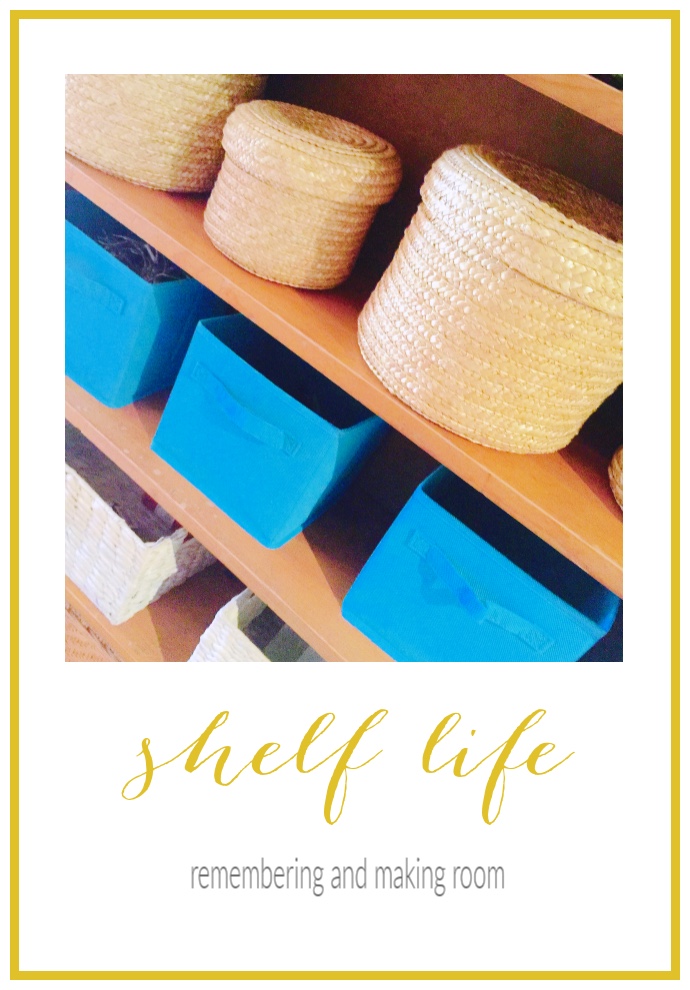 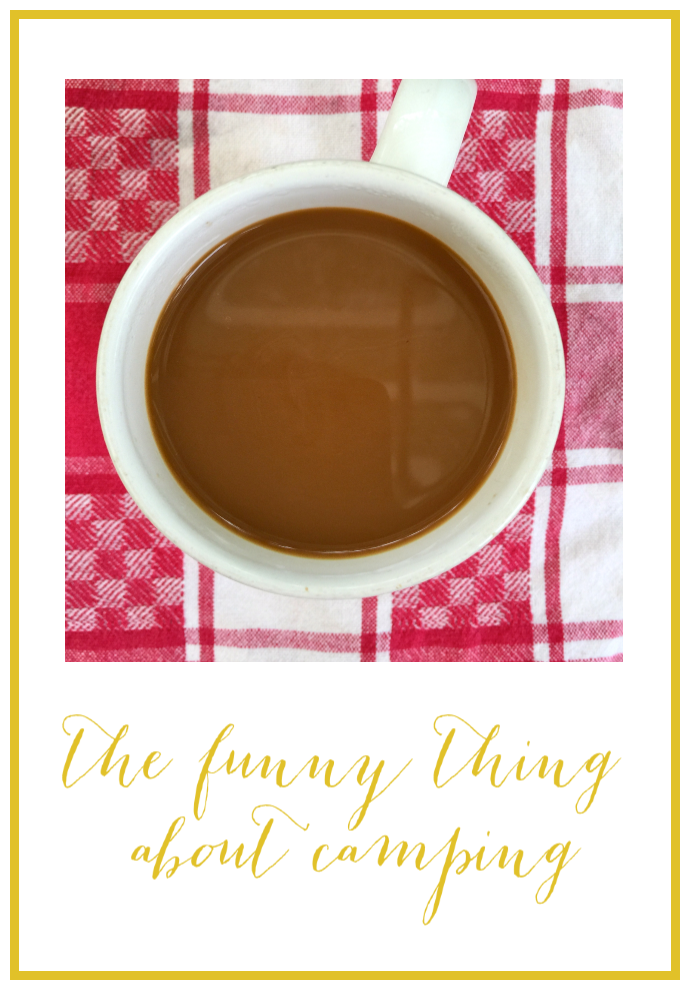